You are using an outdated browser. Please upgrade your browser to improve your experience and security.
Frédéric-Auguste Bartholdi
French sculptor
Media
Print
Thank you for your feedback

Bartholdi trained to be an architect in Alsace and Paris and then studied painting with Ary Scheffer and sculpture with Antoine Etex and Jean Fran?ois Soitoux. He toured the Middle East in 1856 with several painters, including Jean-Léon Gér?me. In 1865 he and several others conceived an idea for a monument to the Franco-American alliance of 1778.

Beginning work in 1870, Bartholdi designed the huge statue on his own initiative and was able to see its construction in Paris through using funds he raised in both France and the United States. It was made from copper sheets, hammered into shape by hand and assembled over a framework of four gigantic steel supports that were designed by Eugène-Emmanuel Viollet-le-Duc and finished by Gustave Eiffel, who later became famous for a different national symbol. The female personification of liberty, the sculpture is dressed modestly in classically inspired drapery, with the rays of enlightenment on her head. She wields the torch of progress while holding the tablets of law, which bear the adoption date of the Declaration of Independence (July 4, 1776), and taking a step forward, breaking the chains of tyranny.

Dedicated in 1886, the statue was titled, in full, Liberty Enlightening the World and was given to the United States by France. Two small versions were unveiled in Paris within a few years: one by Bartholdi, which was placed outside the Musée du Luxembourg and later moved to the Musée d’Orsay, and one that was a gift from the United States to France in 1889 to commemorate the centennial of the French Revolution. It was placed on the Pont de Grenelle.

The Statue of Liberty is Bartholdi’s best-known work, but his masterpiece among monumental projects is the Lion of Belfort (completed 1880), which is carved out of the red sandstone of a hill that towers over the city of Belfort in eastern France. Once a macabre collective tomb for the National Guard of Colmar (1872), this is the best known of Bartholdi’s many patriotic sculptures that were inspired by the French defeat in the Franco-German War of 1870–71.

The Editors of Encyclopaedia Britannica This article was most recently revised and updated by Alicja Zelazko, Assistant Editor. 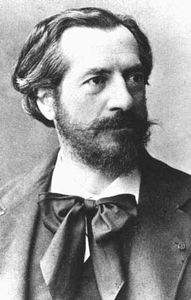